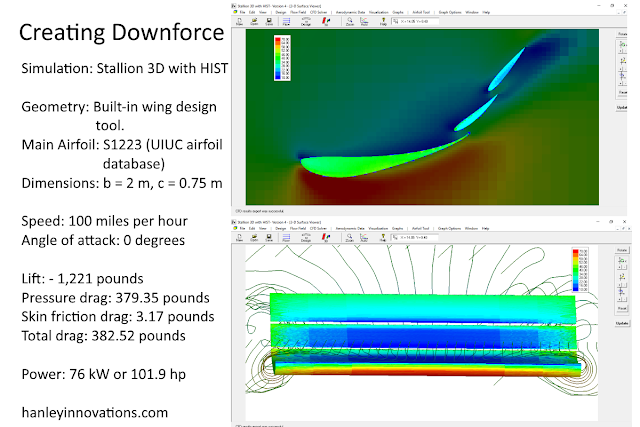 The picture above shows a wing that I created using the built-in wing editor that comes with Stallion 3D.  The main wing is Selig S1223 airfoils while the remaining two airfoils are a NACA 4512 and a NACA 0012.  Since the wing is finite (2 meters in span with a 0.75 m chord), it produces less lift and more drag than is predicted by airfoil (2D) theory.  Accurate 3D predictions enables you to size engines/motors, fuel tanks and predict weight, range and endurance even before the vehicle is built.

Do you have the power to race with 3 Wings?

With more down force, you can corner faster and win races.  But what about power vs. drag on the straightaways?  Stallion 3D will  give you the wing arrangement to win every race. Find out the perfect wing settings to race on hot days, cold ones, wet ones and in windy weather. 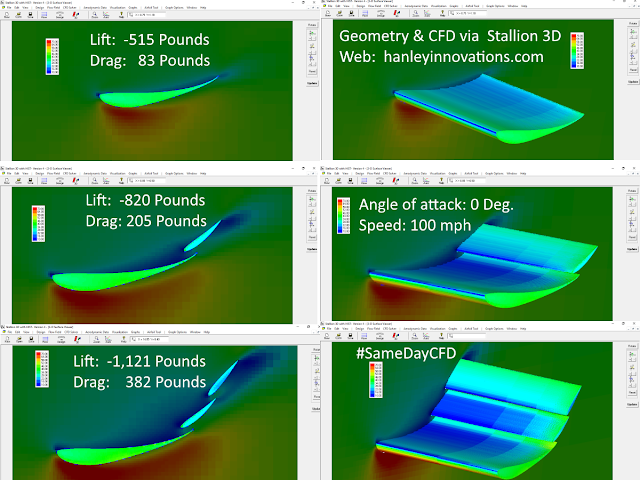 Designing and analyzing 3D multi-element wings in Stallion 3D is exactly the same as in 3DFoil.  Stallion 3D has the identical wing creation tool that is available in MSA-3DFoil.  The big difference is that Stallion 3D analyzes the wing using the 3D Reynolds Averaged Navier-Stokes (RANS) equations and this enables you to predict lift, drag and down force for your multi-element designs with variable thickness, rotations and gaps for your race.  The following video show how to create and analyze a wing using the wing tool and the RANS solver.

Of course Stallion 3D can also import and analyze a CAD file in STL format created in any CAD software such as AutoCAD or Solidworks.  The software performs automatic grid generation directly on your CAD model.  It runs on your MS Windows (7,8 or 10) laptop or desktop computer.

More information can be found at http://www.hanleyinnovations.com. Thanks for reading.